Getting Noticed Hell, Let's Get Published!

There is an old adage in music that if you want to get signed, get in the studio and record all you can.  I've applied this same thought process to my promotional photography.  But who is going to want a photographer with no credentials???  It's the same old problem, if you don't have experience you can't get work, but how are you supposed to get experience without getting some corporate type work?  Get out there and sell yourself and shoot some!

I looked around in the areas that I want to work in and approached the people I saw that were doing something and going somewhere.  Bands recording CDs, new business owners, sports teams getting there marketing together.  Then I started shooting, sometimes for cash, sometimes for trade, usually for  *gasp*  free.  By showing them that I could shoot their live events, shows, etc. well, when it was time to shoot something real, they came back to me.  That's the payoff.  To date, I have images on the covers of three CDs, a bunch of band promo shots, several business marketing packages, and even a semi-pro soccer team.  Today, however, I found out that one of several of my photos have been published in an international magazine!   Whoo-hoo!  How did I manage that you ask???  I did it by working with people that have vision.  I never even knew that an article was being done.  One of the first musicians that I worked with, Todd Sparks, has BLOWN UP in Germany with his beach-cajun-southern rock-country sound, go figure...  He posted his latest CD, Party in Paradise, which we discuss the shoot for in a previous blog entry, on a web based service that provides music to independent radio stations around the world.  They picked it up and spread it around and "BLAMMO!", armed only with a batch of good tunes, some fine pickin', and some rather snazzy promo shots, Todd is being interviewed on Skype!  His work was making enough of a mark to be noticed by the editors of the services magazine, Direct Buzz, and thus, with his interview and included photos, I got published! 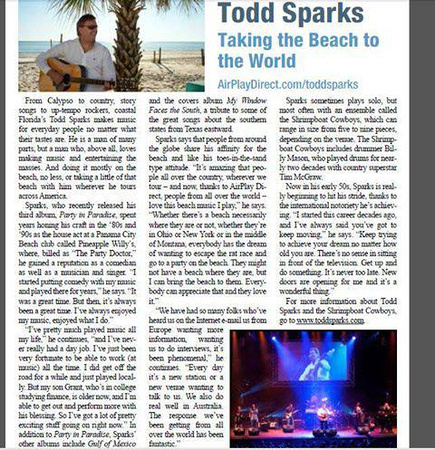 The morals of the story:

1) All work is good work (when you're starting out), but target the areas you want to work in, it's WAY more fun!

2) Find people with vision and see if your vision fits theirs.  If it does, take a chance, invest some time, and run with it.

3) Make sure you thank those people of vision when their hard work turns into your reward - THANKS TODD!

Love what you're doing, and be exceptional!