Ok, so you have your camera and a growing lens collection.  Now you're ready to invest in accessories and studio gear to really start spreading your creative wings.  This can be a confusing and intimidating time - I know it was (and still can be) for me!  Some folks have given me some good information along the way.  I've learned a some things, been pleasantly surprised by some items - and let down by others.  In a series of posts, I plan to group together bits of gear and let you know what I've experienced along the way.

So, I read and watched videos of pros getting great results with their $3,000 lights and $500 stands.  ugh.  I'm just getting started, I want BASIC functionality, at an entry level cost, so I can start learning about portraiture lighting - oh, and I don't want it to be a piece of crap, if possible.

I read Ed Verosky's great introduction to flash photography, 100% Reliable Flash Photography.  It's a great place to start.  Ed stresses simplicity, repeatability, and the concept that light is light!  You don't have to have high-end gear to get high-end results.  So, I decided to take his advise on a two light system based on speedlights.  I already had a Canon 420ex speed light so I need to answer some questions.  First, should I get an upgraded flash for a new main, and next, is there a wireless trigger solution other than the Pocket Wizard that will still get the job done.

At this point, I really have to plug the good people at B&H Photo.  I called them on the phone and they were more than glad to take the time to explain options, talk me into lesser priced products, and helped me make sense of the road ahead.  If you have questions, call them!  As a note, I don't have any connections to the companies that create the products I discuss or the dealers that sell them. 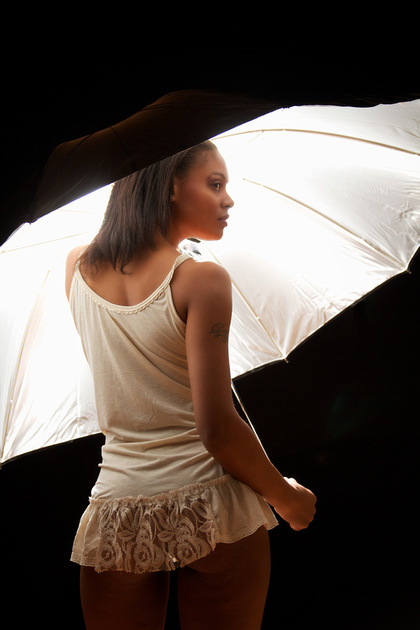 I was looking for something reliable that didn't carry the price tag Pocket Wizards do.  The magic question here is are you using your flashes in manual mode?  By that I mean, do you plan to NOT send TTL data to the flash?  If your answer is "no", like mine was, then the Impact PowerSync16 might fit your needs. The impact line is carried exclusively by B&H and is targeted at the entry level studio photographer.  The components are much smaller than Pocket Wizards and you can get both transmitter and receiver for about what you would pay for one PW.  It features multiple channels and a nice little build in hot-shoe design on the receiver.  Want to add a second, third, or more lights to your rig?  Just buy a few more receivers.  Good range and I have never had them fail.  Like I mentioned, you CAN NOT send TTL info, but that's what you're not paying for.  They work as advertised and are very reliable.

I have to give these 5 little happy bald guys out of 5.

The next item on the list was another flash.  If it's going to be your secondary flash, and you don't plan on using TTL (which we already decided when we went with the trigger above), then the venerable Vivitar 285HV is the way to go.  Ok, it's made out of plastic, has this funky little wheel on the side that doesn't control anything, and is blessed with, let's call it a "retro" look, but, its tough, reliable, consistent, fast and best of all.... wait for it... $85. What you give up with this beastie:
1) Power control.  It only has settings for Full, 1/2, 1/4, 1/16, purple, blue, red, and yellow.  I have no clue what the color settings on the "vari-power" dial do.  Might have something to do with the "Thyristor"...
2) Any credibility as a cool, cutting edge photographer.  It looks like a brick.  This model is only for those that are a) very secure in their gear-manhood, or b) not cursed with self-awareness.

What you get in addition to the important stuff I've already mentioned:
1) Zooma-zoom.  It has a neat tele/normal/wide pullout lens in the front of element.
2) Simple.  You got a switch, a button, and a dial.  Knock yourself out.
3) $500 in your pocket.  Cha-ching!

I have to give this jewel of days gone by 4 content bald guys out of 5
(4 for performance - 3 for being so damn ugly  - 2 for confusing me with that little side wheel + 1 when I finally figured out that it doesn't do anything + 4 for the $85 price tag!)

Noting too fancy here.  I picked up a pair of the Impact small umbrellas.  25" I think, but they don't even carry that size anymore.  Here is the deal on these.  They are about the quality of a little parasol that my 8 year old daughter would play with.  BUT, the are small, light, and CHEAP - $11 I think.  For that price, they are disposable.  However, I almost immediately bought the 45" version which weighs in at a whopping $15 and gives much better light.  If your rough on gear, they just won't last.  Show them a little love and you're good for a while.  I have had mine a year and they are going strong.  They do have a removable cover that converts them from shoot-through to reflective.  That gives you a few more things to play with.  They provide a nice, all over the place kinda light source.  That being the case, bigger is better. Don't forget, you will need a bracket with to mount this rig to your light stand.  That will set you back another $25.  Any of them will do, here is the Impact version.

I am tempted to title this section "pay me now, or pay me later!"  I was buying small umbrellas, I was putting a Speedlight on it, and I wanted to do all on the cheap.  I bought aluminum Impact 8' Air-cushioned Light Stands.  They worked fine.   They are small and easy to carry.  Now that I have studio lights and larger modifiers of various types, I really can't use them much as they just aren't sturdy enough - and my Alien Bees just aren't that big. For an extra $20 I could have got the "heavy-duty" ones instead, and I recommend you do.  I have one of those now that works fine with my boom or larger modifiers.

I have to give the lighter stands two scores to be fair.  In the short term, with the gear I have listed above they got a 4 happy to be taking "real pictures" bald guys out of 5, but in the long run, they can only get a 2 told you so bald guys out of 5 cause I just can't use them for much anymore.

Well, that is the rig that got me rolling.  I am not unhappy with the gear-path that got me to where I am now.  Pretty cheap, pretty flexible.   I'll talk about some of the modifiers I have purchased since then and the impact they have had on my images.  Until then....