Theatrical lighting for a theatrical effect.

I show some work as a visiting artist at the City Arts Cooperative  here in Panama City.  The Coop is a great resource in town and some wonderful folks dedicate time and money to keeping it active.  It hosts painting classes, a photography group, and several dance classes and groups.  One of the most interesting groups is Panama City Belly Dance.  These ladies work hard and put on a great show.  Most importantly, they are just fun folks!

When Jessica, one of the directors of the Coop and a member of the dance group, called me about collaborating on a shoot knew I really had to get the wheels turning and come up with something special.  We discussed some ideas, corresponding costumes, and colors.  We decided to create a very theatrical look in the lighting, and to attempt to capture the motion, energy, and a touch of the mystery of their performance.

For the background, I decided to use a theatrical lighting set up called a Leko, with a gobo and colored gel.  The Leko produces a tight, focused light beam.  The gobo is a stencil that goes between the lenses of the light and produces a crisp light pattern.  I picked, what I thought looked like, a Middle-Eastern fire pattern.  Since I chose fire, red was the color of the gel.

The trick with using a continuous light along with flashes is that the strobes are MUCH brighter and will washout the background if any light spills on the background.  I added barn doors to the lights placed either side of the subject control them.  An orange gel to the left created a complimentary accent light, and a naked bulb on the right gave a strong, dramatic split light.  Jessica did the rest! 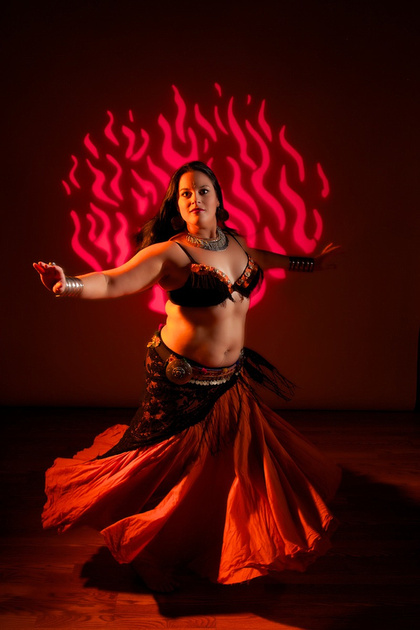 One thing I had working for me, was that I wanted to capture some motion via a subtle blur.  To get the background looking good, I had to lower the power of both my strobes to the minimum, and leave the shutter open for 1/30 of a second.  Because Jessica is a pro, she had no trouble getting her head around a still, while the folds of her skirts where still whirling.  If she hadn't done it, we wouldn't have been able to get the crispness of her face.  That would have really sapped the pop out of the shot.

Below is the diagram for the setup.  There is an error on it.  The AB800 on the right is noted as having a defuser on it.  That was originally my plan, but I pulled it to get the sharp light on Jessica and better control the light. 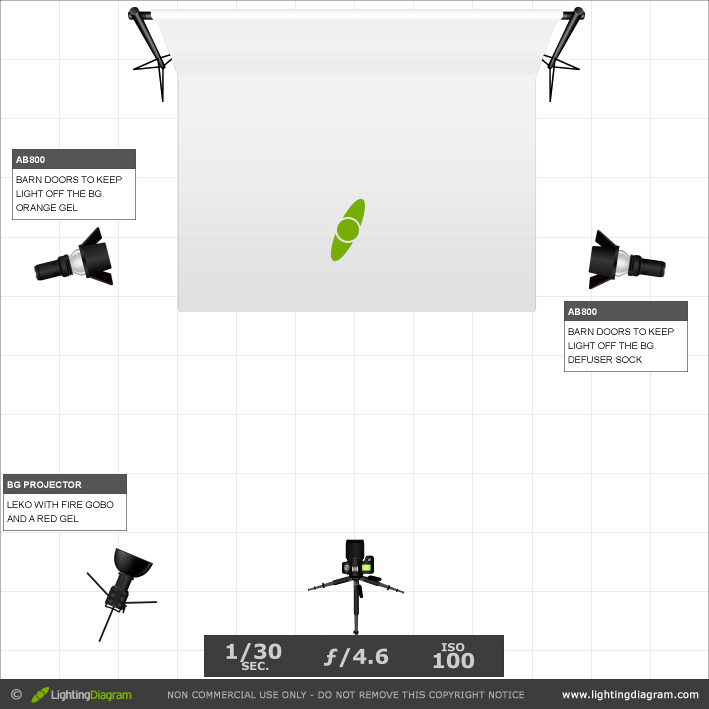 In the end, a talented and creative subject, and a adventurous plan made for a really fun shoot and an interesting photo set.  I will certainly keep continuous lighting effects in mind for future projects.